Misery is Wasted on the Miserable 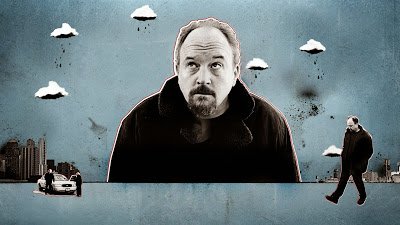 The comedian Louis CK‘s TV show, Louie, has been a boon through the break-up (like the doorstoppers from Knausgaard – but that’s another blog). Louie is a slightly grumpy single dad of a ripening age who doesn’t get enough sex – he doesn’t remind me of me at all.

Vela used to complain that I always picked films about whingey, schlubby guys with permafrowns on their face. She was exaggerating the condition, but had a point – Sideways, American Splendor, Synecdoche, New York, best of Woody Allen, George on Seinfeld, Curb your Enthusiasm…. Louie is yanked from the same twisted comic yarn.

I actually started watching the show when me and Vela still lived together – although the breaking-up part had begun its long, winding course. It was during the bad times, when not only had we stopped sleeping together, we’d also stopped sleeping together. I was spending my nights in the lounge on the fold out, while she had the double bed to herself upstairs.

It was a ‘luxury’ fold out, from Muji, that Vela said cost way too much. I bought it on the joint account, when it seemed like a long term residency in the lounge was what I was facing. Each night, I would lay the fold out down on the rug, bend over to the hitch the sheet over the bottom end, and mutter ‘this is the bad time’.


It’s a line from Goodfellas; what Henry Hill mutters ruefully when he thinks he’s about to be killed – by his friends! – as the high-rolling gangster lifestyle turns homicidal. ‘This is the bad time.’ The line often repeats in my head – it’s almost a comfort.

I’d lie back on the fold out in front of the TV and watch shows late into the evening. I scarfed a series of Louie in a couple of nights. I don’t think this is the best way of watching his shows, but I’m greedy.

In series one, Louie is newly single and slowly facing up to what a profound change this represents for him: that he’s really alone again, and a single parent too. The mood is funny, but awkward, dark, and moving in places.


I’m going through series four currently. I was telling a colleague. He asked if it was still funny and I replied, not really, that it’s more about personal development than gags. In truth the show has only ever made me laugh in bits. I think it’s the nature of the schlub-genre.


The mid-section of season four concerns a doomed romance between Louie and a Hungarian woman visiting New York who doesn’t speak English. It’s an ambitious set-up that doesn’t completely work, with too much of Louie soliloquising. Louie is best as part of a dialogue: with his fellow comedians; Pamela the vamp; or lately the Socratic, meaning-of-it-all disquistions with a wise neighbour doctor.

Like this one walking the dog. The Hungarian romance is over and Louie’s heartbroken:

Doctor: So, you, you took a chance on being happy, even though you knew that later on you would be sad?

Doctor: So, so what’s the problem?

Louie:  I’m too sad… I liked the feeling of being in love with her, I liked it…  I didn’t think it was gonna be this bad.. Why even be happy, if it’s just gonna lead to this? It wasn’t… it wasn’t worth it.

Catch me on a bad day and this exactly how I feel about happiness: that maybe it’s just not worth it, if it’s going to end and leave you feeling miserable.

And then there’s memory – unhappiness’s cruel sidekick – with all of its rewind horrors. I tell the Annoying Son be glad for the good times he’s had in the past. But I’m not sure I believe what I’m saying. Why be grateful for having pin-sharp memories of things that no longer exist? To be reminded of the fact that they’ve gone away? Great.

‘Doctor: Boy, misery is wasted on the miserable.

Doctor: You know… you are a classic idiot. You think spending time with her, kissing her, having fun with her, you think that’s what it was all about? That was love?

Doctor: This is love, missing her… Sweet, sad love… You’re like a walking poem…  this is the good part.

Louie: I thought this was the bad part.

Doctor: No! The bad part is when you forget her.’

I beg to differ.
« What if They’d Hired a Muslim? Valar Morghulis »

Try to look at it like this….(or don't). The very best moment is right BEFORE something awesome happens. This is your before. Enjoy it!

Dude, you need a person. Who is your person? You need someone in your corner. Not to boost you or hold your hand daily or anything as co-dependent as that. But I mean someone that you just know is there to remind you of what you already know.

Thanks for your comments. It is great to hear back.

I like the idea of this being my BEFORE. I am working on enjoying it.

I don't have that person you're talking about. Not quite. Bits and bobs, spread around, but not the whole thing. I need it. We all need that person. I have tended over the years through two big relationships to put all my eggs there. A mistake. That's part of the problem, why I have been feeling a bit empty, partly why I'm bit writing this. And just writing it, and the time it takes up – that helps.