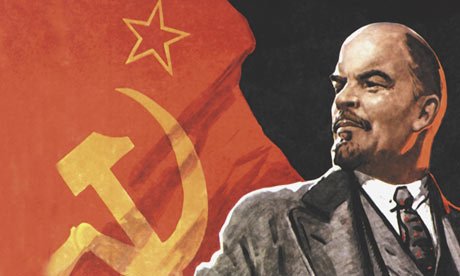 The first May Day I can remember I was six. We were in the Soviet Union – dad said never call it Russia – and we were looking at tanks.
I think of it as one of my earliest memories. I’m wearing a red coat. My brother blue. We’re in a huge crowd of Russians, watching tanks and rocket launchers roll down a wide tree-lined avenue. This is Moscow. It’s 1969. It’s the cold war. There’s rousing heroic music booming from speakers planted in the trees. The Russian soldiers march oddly and the apple juice tastes different.
But I still drink lots of it. Too much. Later, in the queue for Lenin’s mausoleum, I become desperate to pee.* My mum tells me to go against a nearby gate. I worry one of the armed guards will shoot me.
My parents were communists through the late 1960s to the mid 70s. It was a long embrace of something they would never try again. For a while they were poster proletarians: my mum worked in a car factory, and my dad was a coal miner. They were union activists, Communist Party activists, and they also made several trips to the Soviet Union. Later my mum worked for an East German shipping company, while my dad held a position with the British Soviet Friendship Society, before moving on to rep for a travel agency owned by the Communist Party of Great Britain, selling holidays to locations behind the Iron Curtain.
Add it all up. That’s a lot of associating with the enemy. There’s got to be a secret service file on my parents mouldering somewhere in the archives. Not a Category A file, because they were not that kind of people; but there will be something typed up about them and their politics and the people they knew. It will be stacked away in a distant basement, on a back shelf, up high; probably never to be read again, by anyone.
I dig out the video compilation of the home movies my dad made when we were little. There’s footage from the trip to Russia. A battleship in Leningrad. The city’s neo-classical waterfront. The Hermitage museum. Brief, flickering images outside a rural lodge. Me and my siblings walking through Red Square. There’s a long shot of rocket launchers and tanks, followed by a pair of family cameos: mum and the four of us walking in a park; and then mum and the four of us standing on the pavement outside our Moscow hotel. The Soviet tour guide, who rarely left our side, is just off to the left – I wonder if she was a spy?
Back to the rocket launchers and tanks. The film is pock-marked and torn, and the distinctive, evocative cine colour has faded with the years. There’s a glimpse of St Basil’s Cathedral covered in scaffolding. The back of a Russian man’s head. More shots of soldiers and hardware. Perhaps dad was actually a double agent, scoping munitions for MI6. Or maybe he just loved heavy weapons.
The film breaks up. The narrative lurches forward in time; or maybe in reverse time, it’s hard to say for certain. We are now closer to home, in 1960s England, but it’s not very swinging. We’re at a county show, with floats shaped like vegetables, large beer tents, and 1960s hair. There a line of tractors coming towards us. The drivers are farmers dressed up as medieval crusader knights, with their vehicles decked out to look like horses. What strange cult pageant is this, Martian anthropologists will wonder centuries from now.

A military band plays on the bandstand. A large white helicopter descends towards a grubby field. There’s some blink-and-you’ll-miss-it footage of me and the others hanging off a fence, watching the helicopter dip its nose as it lands. I wonder who’s the VIP inside?

We’ll never know. The film jumps forward. We’re off again. An abrupt edit catapults us to another 60s May Day. (dad really loved May Day!) This time we’re at my sisters’ primary school. Half a dozen girls in school dresses are dancing round the maypole holding multicoloured streamers attached to a tall post.
I get the feeling that schools don’t really do maypole dancing any longer. Maybe neo-pagan fertility rites went out of fashion. Or did The Wicker Man take the shine off?
One of the streamers gets tangled up round the foot of the maypole. The head teacher dashes into frame to fix it and skips back out again doing a pretend dance. He smiles at his funniness. He’s no fogey killjoy.
Except he’s dead now. He was fifty plus all the way back then, and probably passed years ago.
And yet, there he goes, so alive, with his slick Brilliantined hair and a spring in his timbres. Not a hint of the bright season’s dark undercurrent coarsing beneath the ‘spring freshets‘. The contrary tug that carries a reminder: another year down, one less to go. It’s all finite, says the passing blossom, and you just spent another one of your share of years. This is the shadow that comes with the hope; it is springtime’s inescapable flaw. As the poet Elizabeth Bishop observed: ‘Nature repeats herself, or almost does: repeat, repeat, repeat; revise, revise, revise.‘
The thought returned at a recent exhibition of early Victorian photography. I was the only person in the room, the last man standing in a gallery full of sepia ghosts. How do photo historians and curators tolerate their job? All day with all those ‘dead people on leave’.**
Returning to the maypole for another look, I realise that one of the girls skipping round and round is probably the elder of my two sisters. But which one of the girls? It’s impossible to say with the blur and dad’s impatience. He doesn’t linger, and is up and off again as the film shifts to a slow, loving pan across the flank of his blue Cortina car, on a family holiday in Devon.
One year at primary school the teacher asked the class what was actually being celebrated on May 1st? My hand shot up immediately and I offered up my ideologically inflected answer: May Day is a holiday that celebrates the international working classes, I trilled. I also added (incorrectly I think) that in the Soviet Union May Day is also a time when the Soviet people celebrate the heroic victory over fascism in the Great Patriotic War.

The teacher stared at me with silent, wide-eyed surprise. Then she smiled and moved the conversation along.

My parents were deeply anti-American during the communist years. At this time a family outing might mean a coach trip to London to march up and down outside the US embassy. One summer the four of us wore ‘Free Angela Davis‘ T-shirts in our small Midlands town.*** I remember a Penguin paperback with a copyright notice saying the book wasn’t for sale in the US, and concluding this was because America was a very bad country. Batman was forbidden on TV at home – too American, too decadent. I could go on and on, and on….

Every May Day holiday, I think of Russia and my wacky boyhood, and smile. I also reflect on the ideological stability of my son’s upbringing in contrast. There’s been no nuttiness, no socially-embarrassing ponchos, no sudden doctrinal lurches, this way or that. We’ve said our bit, here and there, about what’s going on in the world, and why, and how to maybe fix it; but I’m not sure how much has been absorbed. We took J on the inevitable anti-war march – but he’s too young to remember. And then an anti-cuts demo – an opportunity to hear grown ups swear like dockers (as my mum used to describe repeated use of bad language).

But largely, J has made an apolitical bubble for himself, for now. He asked me the other day to remind him of the difference between right wing and left wing – it was pertinent to a fighting game he was playing on his phone. (You’re not your grandfather’s grandson, I thought.) I outlined briefly left vs right, what it means, whose side we’re on. I added, you do know there’s an election going on at the moment, don’t you?
‘Really! Where?’
My head shot around to face at him. His eyes were on his phone. Long pause. Then he looked up and smiled at me.
‘Of course, I know there’s an election going on at the moment.’
The wind-up joke routine. Where did he get that from?

* I still have the bust of Lenin I bought on that holiday all those years ago. It cost five kopecks. It’s one of the few mementoes from my childhood I’ve retained. In the late 80s the bust got separated from its base, meaning it toppled over rather easily – just like the Soviet Union eventually.

*** The T-shirt had a picture of the black American activist and communist with her tall afro hair. My sister wore it to the shops and a man asked her why she had a ‘nig-nog’ on her chest.
« I Found It at the Movies – 10 Lost Cinemas of London The Great Screenplay Writer in the Sky »
Manage Cookie Consent
We use cookies to optimize our website and our service.
Manage options Manage services Manage vendors Read more about these purposes
View preferences
{title} {title} {title}